Key Theoretical Concepts and Methodological Challenges for a Global and Digital Approach to Film, Literary and Translation History 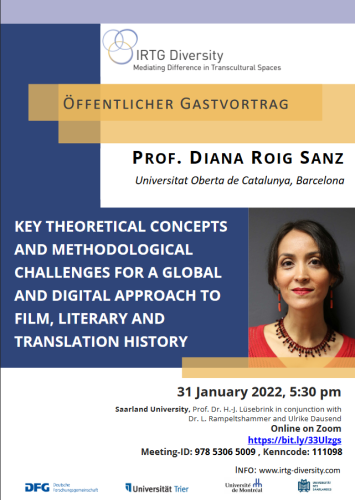 ABSTRACT
This lecture aims at offering some theoretical and methodological insights to examine film, literary and translation history within a global and digital approach. Based on my ERC StG project “Social Networks of the Past. Mapping Hispanic and Lusophone Literary Modernity, 1898-1959”, this lecture aims at contributing, from a theoretical perspective, to a global and decentralized history of these disciplines by seeking to give a voice to marginal and lesser-known actors, whom I understand as cultural mediators (Roig-Sanz and Meylaerts 2018). In this respect, this contribution introduces a gender perspective, sheds light on the Global South (Latin America specifically) and pays attention to units of analysis that go beyond national frameworks to analyze cross-border phenomena involving yet overlooked movements and networks. Thus, I propose a comparative and decolonial approach that reflects upon these issues by applying five concepts that I consider key to global history (Roig-Sanz and Rotger forth. 2022)—space, scale, time, connectivity, and agency, —as well as a case study, drawn from my ERC StG project, to reflect upon these concepts through the rise of cinema (film clubs and film criticism, specifically) and literary translations in Latin America, Spain, and Portugal between the end of the 19th century and 1959.
In the case of cinema history, for example, film scholars have extensively studied film culture as a unique phenomenon that emerged at the beginning of the twentieth century. However, because of this already established film history, literature has mainly focused on the analysis of cinema-going experiences in Western Europe and the US. And we still know very little on how other geographical scales such as Ibero-America (Spain, Portugal and Latin America, including Brazil) experienced the growth of cinematic initiatives characterized by different features which may need new methodological approaches. As a conceptual starting point, I adopt the premise that no single film or literary culture travelled from a specific center to the peripheries to constitute a driving force in the history of cinema or literature. Quite the contrary, I advance the hypothesis that many film and literary cultures developed at the same time or in a short time span, and they all mirrored, came together, competed, or ignored each other. This implies that we must abandon the idea of innovative centers and imitative peripheries and instead address various cinematic or literary projects and spaces of sociability with different scopes and ambitions, and audiences at different scales: local, regional, national, and international.
From a methodological approach, I will present, in the second part of this lecture, some methodological challenges when applying digital tools and machine learning to the analysis of film, literary and translation history. Specifically, I will propose the term Big Translation (BTH) to describe a translation history that can be analysed computationally and that I define as involving: 1) large-scale research (geographical and chronological); 2) massive data understood as big data, accompanied by little data, and drawing on a wide range of often heterogeneous and non-structured sources; and 3) the use of computational techniques as part of the research process, and for the production of knowledge, rather than helping only with visualisation of data. In this respect, one of the main possibilities of BTH, as a conceptual framework and a methodology, is to help decentralize translation, and literary and cultural history, in a broad sense, by breaking with national historiographies, but also by shedding light into minoritized, marginalized, or peripheral objects of study, such as Ibero-American women as cultural mediators.

Diana Roig-Sanz is an ICREA Research Professor and an ERC Starting Grant holder at the IN3 (UOC). She is the coordinator of the Global Literary Studies Research Lab and the principal investigator (alongside Laura Fólica) of the research line Global Translation Flows. She is also the principal investigator of the ERC StG project “Social Networks of the Past. Mapping Hispanic and Lusophone Literary Modernity, 1898-1959” (Grant Agreement: 803860). She has been a Ramón y Cajal Research Fellow and a visiting professor at the Oxford Internet Institute at the University of Oxford and has conducted research residencies and postdoctoral fellowships at top-ranked institutions, such as the Centre for Translation Studies (KU Leuven), the Institut d’Histoire Moderne et Contemporaine (École Normale Supérieure), the Department of European and Intercultural Studies (La Sapienza), and the Amsterdam School for Cultural Analyses (Amsterdam). Her research interests deal with cultural and global literary history and sociology of translation from a digital humanities approach. Her successive projects have been based on a consistent and fruitful line of research focusing on cultural transfer and the circulation of cultural goods. In this respect, she has always strived to challenge former scholarly interpretations and develop new original approaches.