Lecture by Lisa Johnson on January 26 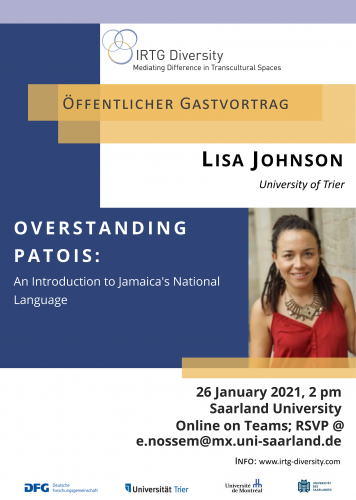 IRTG Diversity Alumna Lisa Johnson (University of Trier) will present on her current research about "Overstanding Patois: An Introduction to Jamaica's National Language"

ABSTRACT
This paper is an introduction to the socio-cultural and linguistic history of Jamaican Patois, also known as Jamaican Creole. The Western Caribbean island of Jamaica is the third largest of the Greater Antilles with a population of 2.9 million inhabitants. Standard English is the country´s official language –taught in schools and used in official media, businesses or churches– while local Creole was historically stigmatized as the speech of the lower socio-economic classes or the rural population; considered inferior or “broken English”. After Jamaica´s independence from British colonialism in 1962, Patois was increasingly recognized as a “nation language” representing the island´s hybrid cultural identity and socio-historic turbulent past, with its English vocabulary, West African grammar, indigenous words and non-British pronunciation. This recognition stems not at least from the anti-colonial and anti-racist stance of influential Jamaican poets such as e.g. Louise Bennett or Linton Kwesi Johnson and Reggae/ Rastafari icon Bob Marley who wrote and performed in Patois. Here, the development of Patois was especially influenced by Rastafari-invented linguistic changes, which aim to contradict the use of the colonizers language by avoiding words with a negative connotation such as “under-” (see above: under-standing = over-standing). The worldwide resonance of Jamaica´s popular music made Patois a global linguistic super force, spoken by Jamaicans and non-Jamaicans alike, captivating literature, poetry and academic prose. This talk sets out to explore Jamaican “ways with words” at the intersection of language, culture and artistry.

For more Information on Lisa Johnson: http://irtg-diversity.com/irtg/index.php?page=people&person=lisa_jung&id=704
» go back to news index