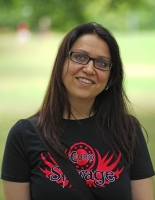 Svetlana Seibel has written her dissertation as a member of the first cohort of the IRTG Diversity’s doctoral students. Her dissertation is situated at the intersection of Indigenous Studies and Popular Culture Studies. Much of her research in general is concerned with aspects of diversity in popular culture, both on the level of representation and participation. As an associate professor of North American Literary and Cultural Studies at Saarland University, she teaches course which reflect these research interests, from Indigenous literatures and media in North America to geek feminism in contemporary television. As an associated postdoctoral fellow of the IRTG who is at the same time an alumna of the IRTG Diversity’s PhD program, she is uniquely positioned as far as providing help, support, and advice for the subsequent groups of IRTG’s doctoral researchers is concerned.

This postdoctoral project focuses on women’s writing in the Pacific Northwest region of the United States and Canada in the period between 1860 and 1935. The selection of this particular period is based on the fact that this time represents a perceived gap in the production of “serious literature” in the Pacific Northwest, according to some literary histories of the region. As evidence shows, however, the Pacific Northwest literary market was very active during that period and was dominated by prolific women writers and public figures whose work, although influential at the time, has been largely written out of literary histories. Settler women writers such as Abigail Scott Duniway, Caroline C. Leighton, Anne Shannon Monroe, Ella Higginson, Eva Emery Dye, Frances Fuller Victor, Agnes Deans Cameron, and Emily Carr, and Indigenous women writers such as E. Pauline Johnson Tekahionwake, Sarah Winnemucca Hopkins, and Mourning Dove have all produced writings that negotiate (and in some cases question) the emergent regional self-understanding and self-fashioning at the time of ever shifting boundaries. These literary negotiations navigate a discursive tension between regional and national discourses in the region after the settlement of the international boundary between Canada and the United States through the Oregon Treaty of 1846. These authors use various genres and forms of writing, from fictional narratives and autobiographical accounts to travelogues, journalistic, and historical writing in order to engage with the land and region and to negotiate their specificities in conversation with various national narratives, settler as well as Indigenous. By doing so, processes of memory and history making are often at the forefront of these writers’ literary projects. Far from being insignificant for the literary history of the region—and, indeed, of the United States and Canada—these works not only establish common ground for later regional literature to build on, but also create and navigate a regionally grounded intellectual tradition that stands in conversation with the wider intellectual history of Canada and the United States. Significantly, this intellectual tradition is defined by an exceptionally strong sense of place, shows a preoccupation with the political and social situation of women, and is fraught with issues of coloniality and Indigenous-settler relations. These women writers and these cultural processes are at the core of this postdoctoral research.

Since 2016
PostDoc Project: "Being and Becoming California: Interrogating California Narratives in Literature and on Screen" (working title)

2016
“Of Vampires, Maps, and Comic Books: Exploring Narrative Sites of Decolonization” (in cooperation with Ashley Morford) – Panel at the CIARS Decolonizing Conference 2016, University of Toronto

The Society for Multi-Ethnic Studies: Europe and the Americas (MESEA)

2021
“Thinking in Connections: A. A. Carr’s Eye Killers and F. W. Murnau’s Nosferatu”, in: Simon Bacon (ed.), The Transmedia Vampire: Essays on Technological Convergence and the Undead (Jefferson: McFarland), 134-145.