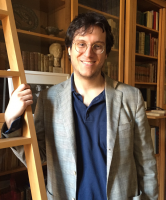 Manfred Posani Löwenstein received his Ph.D. from the Scuola Normale Superiore di Pisa in 2015 with a thesis on the concept of the unconscious in the historiography of Jacob Burckhardt. His area of specialization includes Modern Philosophy, XIXth Century Anthropology and Historiography, Metaphysics, Historical Epistemology, German Modern Philosophy (Kant, Hegel, Nietzsche) and Theories of Culture (E.B. Tylor, Burckhardt, Warburg, Freud). His area of competence includes Aesthetics and Political Philosophy.
He is currently working on both the French and Italian critical editions of Nietzsche’s philological writings (Les Belles Lettres, Adelphi). At the IRTG Diversity he will investigate the reactions raised by the false report of the burning of the Louvre during the Paris Commune (1871).