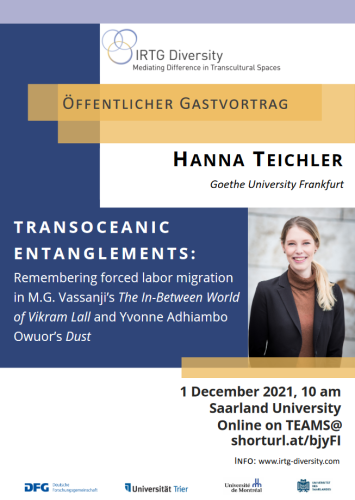 ABSTRACT
Read in juxtaposition, these texts challenge the traditional separation between the Indian and the Atlantic Ocean as separate mnemonic spaces, or regions of memory; the former associated with the practices and legacies of indentured labor, the latter with transatlantic slave trade. The comparative framework that allows for, or more precisely calls for a juxtapositional reading of both novels, is that of English-language literatures across the globe, which understands anglophone literature not as an “imaginary assembly of national literatures” contained within themselves, but as “a discursive field [… that] is capable of encompassing the both the literary practice of writers who can no longer be related to one particular ‘national literary space’ […] but also to the worldwide field of English-language literatures and specific forms of communicative interaction and political conflict engendered by it” (Schulze-Engler 2012, 11-12). Put differently, Owuor’s and Vassanji’s texts are case studies to (further) theorize comparative frameworks of a global reach. Vikram Lall and Dust thus exemplify how fictional representations of transregional entanglements operate with what Astrid Erll describes as “conscious modes of relational remembering connecting various cultural memories” (2018, 274) across time, and more importantly for this analysis, across space. As my reading will show, these two texts render visible historical, mnemonic and imaginary connections that are situated at the threshold between the national and the global. In their efforts to imagine a national consciousness after Kenyan independence (Dust) and to dwell on the positions of coolie descendants in the Kenyan national fabric (Vikram Lall), these novels represent a Kenyan national identity that is radically facing outward, across the oceans. As will be outlined in the following, in order to analyze how remembering chattel labor makes visible multidirectional entanglements cutting across national and cultural frameworks as well as mnemonic regions, I argue, a shift of perspective – from the regional/national to broader lenses such as the transoceanic – is required.

Hanna Teichler is a postdoctoral research associate in the department of Anglophone Literatures and Cultures at Goethe University, Frankfurt. With Rebekah Vince, she is co-editor of Brill’s Mobilizing Memories series and their Handbook Series in Memory Studies. She is also a member of the Memory Studies Association Executive Committee and Astrid Erll’s Frankfurt Memory Studies Platform.

WHERE
MS TEAMS
shorturl.at/bjyFI
» go back to news index