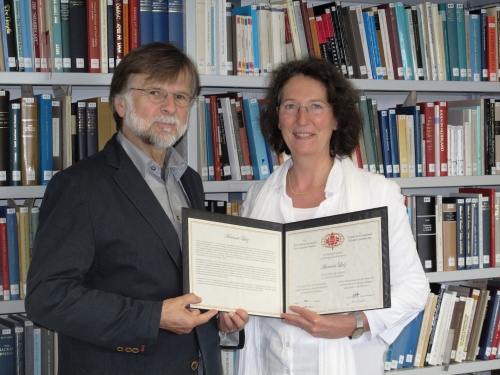 Hartmut Lutz and Ursula Lehmkuhl
Guest Lecture by the IRTG Diversity's visiting professor Hartmut Lutz:
Based on few actual encounters but a growing amount of visual and textual (re)presentations, people in Germany have constructed, expanded, romanticized, and ossified "their" image of American "Sa(l)vages," resulting in a phenomenon described as "Deutsche Indianertümelei" (German Indianthusiasm). But in the course of more than five centuries, and especially after the Second World War, there have been multiple personal encounters between "American Indians" and Germans. Aboriginal American visitors to Germany, reacting to "Indianthusiasm", developed their own strategies to cope with the stereotypes and deconstruct the myths they encountered.
Hartmut Lutz' presentation briefly scanned the development of Indian stereotyping and then focused on the growing diversity of visual, textual, philosophical, and economic responses by Aboriginal artists, writers, intellectuals and entrepreneurs. In conclusion, it sampled some of the “mythbusting” reactions by Canadian Aboriginal sojourners in Germany, which are the focus of a current transatlantic research project, involving Aboriginal scholars, visual artists, and creative writers, as well as non-Aboriginal researchers.
» go back to news index