The Border as Sex Worker 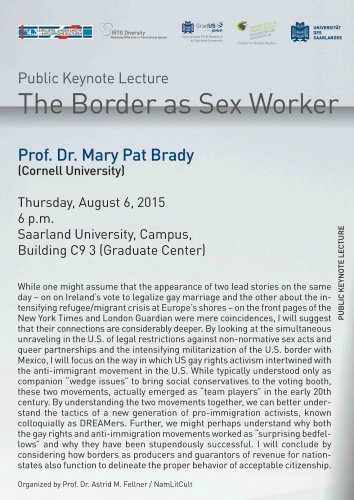 Abstract: While one might assume that the appearance of two lead stories on the same day – on on Ireland’s vote to legalize gay marriage and the other about the intensifying refugee/migrant crisis at Europe’s shores – on the front pages of the New York Times and London Guardian were mere coincidences, I will suggest that their connections are considerably deeper. By looking at the simultaneous unraveling in the U.S. of legal restrictions against non-normative sex acts and queer partnerships and the intensifying militarization of the U.S. border with Mexico, I will focus on the way in which US gay rights activism intertwined with the anti-immigrant movement in the U.S. While typically understood only as companion “wedge issues” to bring social conservatives to the voting booth, these two movements, actually emerged as “team players” in the early 20th century. By understanding the two movements together, we can better understand the tactics of a new generation of pro-immigration activists, known colloquially as DREAMers. Further, we might perhaps understand why both the gay rights and anti-immigration movements worked as “surprising bedfellows” and why they have been stupendously successful. I will conclude by considering how borders as producers and guarantors of revenue for nation states also function to delineate the proper behavior of acceptable citizenship.