Crossing Boundaries in a Post-Ethnic Era – Interdisciplinary Approaches and Negotiations 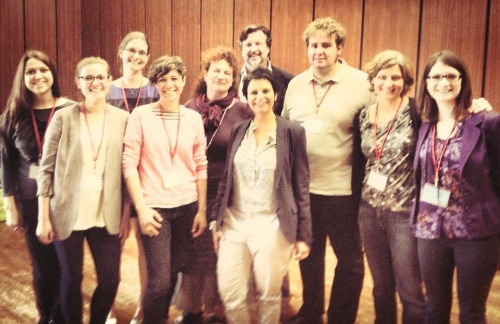 IRTG Diversity Participants at MESEA 2014
Saarland University hosted the Society for Multi-Ethnic Studies: Europe and the Americas' 9th biennial conference from May 29 to June 1, 2014.

The topic of the conference was: “Crossing Boundaries in a Post-Ethnic Era – Interdisciplinary Approaches and Negotiations.” Moving into the second decade of the twenty-first century, interdisciplinary border studies are still in need of new theoretical approaches that not only move beyond the “borderless” discourses of the post-Cold War era, but that also respond to the urgent need that was articulated in the late 1990s for a conceptualization of borders/ boundaries as the sum of social, cultural, political, and economic processes. Following the 9/11 attack in the U.S., the reality of increased border securitization as part of the “war on terror” has undermined the neo-liberal rhetoric of the “borderless world.” At the same time, partly as a reaction to globalization and partly as a response to emerging regionalism and ethno‐regionalist movements, a number of states have set in motion a process of re‐scaling in which they have devolved part of their power in governance to supra‐state and sub‐state regions (cf. Paasi 2009). As a result of the above, the complex roles of borders and boundaries have become more relevant than ever, necessitating a reconceptualization that sees them as processes, discourses, practices, even symbols, through which power functions. This year’s special focus on border studies contributes to new discussions and networking over disciplines.

For further information on the conference, click here: http://mesea.org/files/program2014.pdf

Organized by North American Literatures and Cultures at Saarland University

For questions, please contact Prof. Dr. Astrid M. Fellner at amerikanistik@mx.uni-saarland.de
» go back to news index
» top of the page