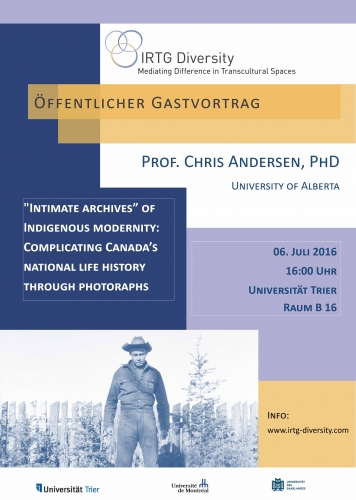 The photograph depicted on the poster shows Jean-Baptiste Arcand (nicknamed “Big John”) as a cowboy, a popular meme for demonstrating masculinity in mid twentieth century rural western Canada. This photograph is interesting, however, not just for the extent to which Big John was (or was not) successful in embodying that meme but rather, for the potential effacement of the mid-century gender relations that made it possible.

This talk seeks to juxtapose this pictorial archive and the masculinity it represents with an alternative – and more gendered – analysis of the photograph. Ultimately, if much of the photograph’s awesome power stems from its apparent ability to represent “the real”, this presentation will attempt to frame that “realness” within the gendered relations of mid-century Métis communities that made it (appear) so. This not only complicates the life history within which scholars might position Métis masculinity, it provides a more complex accounting of the density of everyday Indigenous life in post-WWII rural Canada.
» go back to news index